In the third quarter, properties repossessed by banks had been in the foreclosure process an average of 630 days, the longest since RealtyTrac began tracking such data in 2007. Twenty-eight states posted year-over-year increases in the length of time to foreclosure, and a flood of foreclosed homes could be hitting the market soon.

The number of REOs surged 66 percent from a year ago, as “a backlog of bank-owned homes held up by various legislative and legal delays is finally spilling over the dam, and many of these homes will be hitting the market for sale in the next 12 months,” according to RealtyTrac’s latest foreclosure report.

The states with the longest time to foreclose in the country — more than 3 years — are New Jersey, Hawaii, New Mexico, Utah, and Florida.

According to RealtyTrac, the reservoir of year-old bank-owned homes will be highest in the following places: 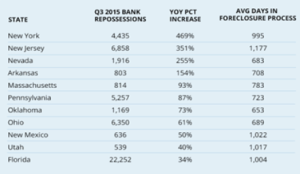 Your email is safe with us.

We're currently offline. Send us an email and we'll get back to you, asap.